Next week, some of the best run-bike-run athletes in the nation will compete at USA Triathlon’s annual Duathlon National Championships on April 7-8. For the first time, the event will be held in the beautiful Greenville, South Carolina with three races taking place: the draft-legal sprint, the non-draft standard distance, and the non-draft sprint. As always, VolunteerLocal is happy to help!

“VolunteerLocal has made the communication process with volunteers so much more seamless,” says Caroline Robinson, Volunteer Coordinator. “Also, the different functions for the dashboard has made it very easy to stay on top of all the events I’m responsible for. I serve as the volunteer coordinator for three of our national championships at USAT.”

Founded in 1982, USA Triathlon sanctions more than 4,300 races (so this isn’t their first rodeo) and connects with nearly 500,000 members each year, making it the largest multisport organization in the world. The organization serves as the National Governing Body for triathlon, as well as duathlon, aquathlon, aquabike, winter triathlon, off-road triathlon, and paratriathlon in the United States.

Want to help, too? Volunteer!

Between seeing the foothills of the Blue Ridge Mountains and experiencing the Southern charm (and sweet tea!) of South Carolina, volunteers at the Duathlon National Championships can expect to interact with the athletes participating in the event and to learn a lot about the sport. While there’s been a lot of locals from South Carolina recruited (including high schools sports team or clubs, college students, and businesses in the area), you are invited to volunteer alongside them. Jobs available include Finish Line Support, Run Course Support, Awards Ceremony, Transition Assistant, and more!

Why volunteer with the Duathlon National Championships?

Volunteers will receive a special volunteer t-shirt for volunteering (hello SWAG!). They will also be served breakfast and/or lunch based on the time of their shift, plus plenty of snacks and beverages (so you definitely won’t go hungry). One of the best parts about volunteering at the event though is cheering on athletes competing for a National Championship. Goooo team!

Volunteer at the Duathlon National Championships in Greenville, SC!

Curious about the features included in VolunteerLocal’s upgrades? Want to learn ways to enhance your experience and the experience of your volunteers? There are endless benefits to the tools offered on VolunteerLocal’s paid plan types. Here are just a few of our favorites available on the Discover Plan.

Communication Tool – Send email blasts event-wide, or to specific jobs or shifts. Never look up an individual volunteer’s schedule again – we offer data tags, which automatically populate with each volunteer’s individual information, including their upcoming job and shift schedule. Create and schedule email reminders to go out as often as you’d like, to help avoid no-shows.

Group Registration – Allow volunteers to sign up with friends or family members, ensuring they work the same jobs and shifts together without any intervention from the volunteer coordinator. VolunteerLocal will keep them bundled together, so you can easily keep track of them.

Additional Administrative Users – Get by with a little help from your friends or team members. Add administrative users to your VolunteerLocal account, so they can assist with volunteer management. You can restrict or grant permissions to select events and certain features within the database for each administrator.

Copy Event Feature – No need to build out the same jobs, shifts, or registration questions each time. You can copy your events over year to year (or month to month) with just a click of a button, copying as much or as little of your event as you’d like.

Job & Shift Descriptions – Let volunteers know what to expect for their registered position with individual job and/or shift descriptions. These will be included in the confirmation message volunteers receive immediately after registration, so everything they need to know will be delivered to their inbox.

Copy and Move Volunteers – Schedules change, but that doesn’t have to be a hassle. Easily re-schedule volunteers into different jobs and shifts by dragging and dropping them or copying them into additional positions.

Want a demo of these features? Ready to become a Discoverer? Shoot us an email at hello@volunteerlocal.com. And stay tuned for best features of our Grow and Conquer plans!

The Rock ‘n’ Roll Marathon Series is a one-of-a-kind running festival experience. The concept behind this series began as a simple, fun idea: what if the race director could book live bands to perform along the course as runners passed? Perhaps the finish line, too?

The year was 1998 and the first Rock ‘n’ Roll Marathon was born. It was an unforgettable experience, a huge hit amongst both runners and artists in San Diego, CA – and something that decidedly could be scaled and shared with other runners around the world. Today, the Rock ‘n’ Roll Marathon Series produces 5k races, half-marathons and full marathons in more than 30 cities annually – including Las Vegas, Chicago, Nashville, Washington DC, Madrid and Mexico City. The finish line concerts feature hugely popular artists such as Macklemore and Ryan Lewis, Goo Goo Dolls and Train. We’d run a marathon to see those shows! Well, we’d try. 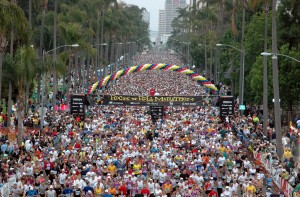 “While entertainment and the energy of a festival weekend define the Rock ‘n’ Roll Marathon series experience, runners have raised more than $310 million for participating charities shows our heart and soul,” the website reads.

In addition to the impressive charitable component to each race, these events also rely heavily on the helping hands of local, community volunteers. For this, the team at Rock ‘n’ Roll Marathon trusted VolunteerLocal.

The volunteer coordinator can easily manage multiple events at once – and with most of these marathons recruiting volunteers concurrently, the task of ensuring jobs and shifts are filled to capacity is almost nonexistent.

Interested in signing up to volunteer for an upcoming Rock ‘n’ Roll Marathon? Peruse those opportunities here – and happy volunteering!

Twin Cities In Motion (TCM) is a non-profit corporation that organizes and directs the annual Medtronic Twin Cities Marathon – a Top 10 U.S. Marathon – in addition to many other races throughout the year.

A marriage of wellness and social good, Twin Cities In Motion aims to promote healthy lifestyles through running events and community outreach. They accomplish this most notably by donating a portion of every race dollar to youth, wellness, charities and the sport of racing. This year, Twin Cities In Motion raised more than $800,000 with its charity partners. Oh – and we love their manifesto.

“My favorite feature is the instant email confirmation that is sent after registration – it provides the volunteer peace of mind that they are registered, and lets them know we are excited to have them join us!” – Kelli Bartholow, Operations & Volunteer Manager at Twin Cities In Motion

Twin Cities In Motion recruits over 6,000 volunteers each year. “Our most notable and longest running event is the Medtronic Twin Cities Marathon,” says Kelli Bartholow, Operations & Volunteer Manager. “We host a total of 21 events throughout the year, and all of them require the helping hands of volunteers.” Bartholow adds, “We literally couldn’t run without them!”

Twin Cities In Motion partnered with VolunteerLocal in 2012. The automation, reporting, and simple webpage integration have helped Bartholow and her team hit a competitive stride. “I’ve been very impressed with the ease and functionality of VolunteerLocal,” says Bartholow. “The reporting tools are very user-friendly and they assist in the management of our volunteers.”

Bartholow coordinates the volunteer members of the 350-strong TCM Association, in addition to the thousands of community volunteers who turn out to support these events. “I would certainly recommend VolunteerLocal to others who are looking for a volunteer management system.”

Learn more about how VolunteerLocal can serve your sporting event!

It’s 3AM in downtown Pittsburgh, and over 30,000 runners are packed in at the start line. Wearing tu-tus and knee socks, matching t-shirts or even carrying a huge flag emblazoned with a charity logo, 3,107 of them are “running for a reason” as members of the Pittsburgh Marathon’s hugely popular “Run for a Reason” Charity Program.

This year’s Run for a Reason was the most successful to date: in sum, the runners raised over $1.8 million for the 52 charities represented at the race.

“For me, it’s knowing that there are going to be people who have been training for months, recovering from all sorts of ailments or running for someone else – it’s seeing them cross the finish line. That’s the most fulfilling part of my job.” -Mara Spisso, Charity Program Coordinator for the Pittsburgh Marathon

Due to increasing demand, the Pittsburgh Marathon developed a “contributing charity” level which allowed charitable organizations to spearhead their own, independent fundraising efforts at the race. This grassroots approach worked particularly well for Light of Life, a homeless shelter that raised over $25,000 at the Pittsburgh Marathon. “It just blew everyone out of the water,” says Spisso.

This year’s Marathon utilized over 2,800 volunteers. From Mile Marker Stations to Aid Stations, bag pick-up to shirt pick-up – no job was left unfilled.

“We sent out a survey to our volunteers after the race, and their responses were just overwhelmingly positive for VolunteerLocal  – it was so easy.” -Melissa Cade, Volunteer Operations Captain for the Pittsburgh Marathon

“We had a great experience with VolunteerLocal,” says Melissa Cade, Volunteer Operations Captain. “The customer service was phenomenal. We’ve never worked with another volunteer software organization with that kind of support – it was like a whole new world.”