If you’re familiar with the TV show Parks & Recreation, you know the opinionated Ron Swanson, who worships meat and doesn’t believe in vegetables. As he once said, “I need five courses for dinner, and each course will be steak.” And we can’t say we disagree with his principles. Which makes the Texas Reds Festival, a celebration of steak and wine, sound like something that’s right up our (and Ron’s) alleys.

Beyond beef and beverages, the Texas Reds Festival started as a way for the City of Bryan to showcase their reviving Downtown Bryan. The downtown area fell into neglect for a number of years, slowing the flow of tourism. The Texas Reds Festival was started in 2007 as a way to bring back some foot traffic to the newly bustling city. “The festival is a great way to introduce Downtown Bryan to newcomers, so they can see how much it has changed,” says Amanda Reynolds, Events and Programs Manager for the Downtown Bryan Association.

“We would never use anything else but VolunteerLocal!” – Amanda Reynolds, Events and Programs Manager for the Downtown Bryan Association 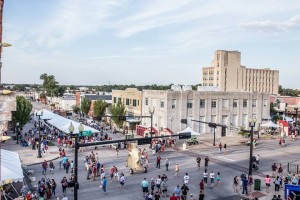 The Downtown Bryan Association is a nonprofit that works to create and cultivate the culture and community of Bryan’s downtown district. They took over management of the festival three years ago and now partner with the City of Bryan to make sure that the festival goes off without a hitch – a partnership which, one could say, goes together just like grapes and steak. The festival is now in its 10th annual year, featuring not only tasty tidbits but performances by Ray Wylie Hubbard and Grammy Winner Rodney Crowell, as well as train rides on the Union Pacific Heritage train and lots of kid friendly activities.

The Downtown Bryan Association also supports the community through the Texas Reds Festival. Thanks to the proceeds from the festival, the organization has donated over $35,000 to nonprofits and civic organizations within the community, as well as given out five scholarships to local high school students in the past two years. It’s a great way to continue ensuring the growth of Downtown Bryan and supporting its citizens. 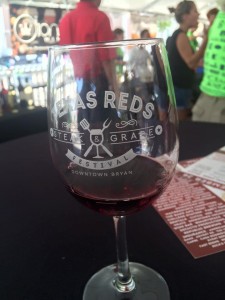 This growth wouldn’t be possible without a serious volunteer force. The festival requires over 500 dedicated volunteers every year, assisting as beer servers, hospitality attendants, wine runners and more. And speaking of dedicated – the Downtown Bryan Association has been with VolunteerLocal since the start.

“Since Downtown Bryan has taken over Texas Reds, we have always used VolunteerLocal,” says Reynolds. “The first year we managed the festival, we only took advantage of the free version. However, last year, we upgraded and what a difference it made! The ability to being able to check volunteer in and out was well worth it!”

So make Ron Swanson proud and become a Texas Reds Festival volunteer today. Don’t miss this opportunity to help out your fellow meat-lovers and support a growing community.