Some of us (we won’t name names) are old enough to remember when KISS came out with their hit song, “Detroit Rock City.” But Gene Simmons isn’t the only one that thinks Detroit rocks. As the lead singer says, “Get up, everybody’s gonna move their feet.” And that is exactly what our friends over at the Detroit Free Press/Talmer Bank Marathon have been doing.

In 1978 Neal Shine, the managing editor of the Detroit Free Press, watched the Falmouth Road Race and was overwhelmed by the event. He suggested that the newspaper sponsor a similar event in Detroit, where he knew such a race would benefit the city. And that was how things got (rock ‘n’) rolling, eventually growing into Michigan’s largest road race.

“We often like to refer to the third week in October as, ‘Detroit’s Marathon Weekend,’” says Leah Yanuszeski, Digital Director of the Detroit Free Press/Talmer Bank Marathon. “Meaning it’s not just an event for runners. It’s an event in Detroit, about Detroit, for Detroit.” 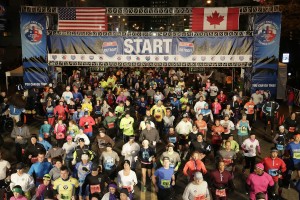 The marathon involves multiple distance events, including a marathon, half marathon, disabilities & relay divisions, 5k walk/run, and a Kids Fun Run. The course goes through many different neighborhoods, where residents come out to cheer and support the thousands of runners passing by. That foot traffic impacts the city economically, bringing in waves of athletes, family and friends to Detroit each year.

The all-encompassing event embraces participants not only from Michigan, but from across the globe. It also welcomes elite runners and casual walkers alike (it’s been called one of the 10 best events for first-time marathoners by Rodale Publishing). One of their secrets to managing that amount of activity? Volunteers.

Each year, the Detroit Marathon has over 3,500 of volunteers putting their best feet forward. And they’re all run through VolunteerLocal. “VolunteerLocal has kept our volunteer lists and information organized and handy,” says Yanuszeski. “It’s a great resource for our staff, and helps us to easily see how far along we are in recruiting volunteers each year.”

You might not be a fan of rock music, but few things rock harder than volunteers. Sign up to become a Detroit Marathon volunteer and get a free t-shirt, an invite to a post-race volunteer thank you party, plenty of free smiles and high-fives from the race participants, and more.